During our temporary closure, we are without the ticket and concession sales that make up 70% of our operating budget. If you appreciate the digital curation work we're doing here, please consider supporting Amherst Cinema through Membership, donation, or the purchase of a gift card. Thank you! 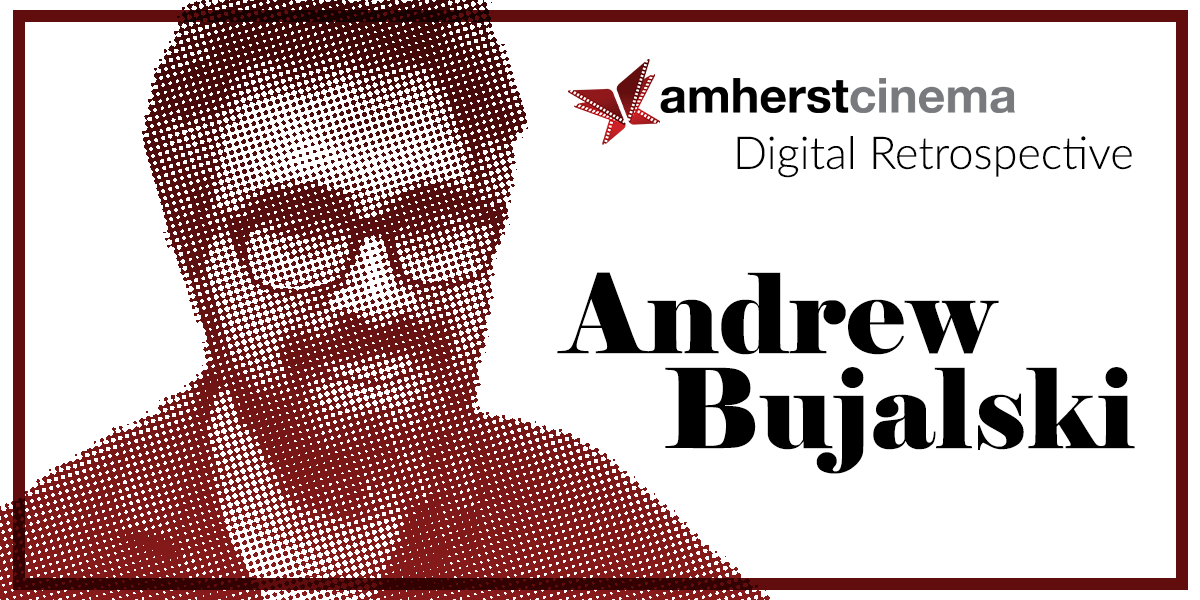 Amherst Cinema is thrilled to present our first Digital Retrospective: the films of Andrew Bujalski. On this page, you can watch Amherst Cinema General Manager George Myers in conversation with Bujalski, read about the filmmaker's six feature films, and discover where to stream them all.

Now based in Austin, Texas, Andrew Bujalski was born in Boston and studied film at Harvard, where legendary Belgian filmmaker Chantal Akerman served as his thesis advisor. Bujalski's first feature, FUNNY HA HA, was shot in Allston and completed in 2002, but didn't receive wide theatrical release until 2005. FUNNY HA HA made huge waves in American independent film, helping to launch and define the genre that would become known as mumblecore. He's since directed five more features: MUTUAL APPRECIATION (2005), BEESWAX (2009), COMPUTER CHESS (2013), RESULTS (2015), and SUPPORT THE GIRLS (2018).

While we're all dealing with the discomfort and confusion of enforced social isolation, Bujalski's work transports us to familiar, if sometimes uncomfortable places, from the awkwardness of our youth to the dysfunction of a workplace.

An exceptional writer, he's able to create poignant dialogue that feels real, with characters often struggling to finish sentences. As a director, he's equally gifted. Whether shooting on 16mm, video, or digital, his films keep us close to the characters, framing them so their emotional, internal world speaks as loudly as the physical world they inhabit on screen.

Bujalski's early films were often shot with non-professional actors and small budgets giving the viewer a tangible, almost documentarian's, sense of time and place and bring; under-furnished apartments and dimly lit porches are transitional spaces for characters in flux, people who are figuring out who they will become. A gym and hotel conference room suddenly feel like an entire universe.

His later work, though now working with larger budgets and teams, still focuses in on the tangible and real power of our relationships—how they sustain us and stress us.

It's a great pleasure to present this wonderful and insightful interview with Andrew Bujalski, and invite you to enjoy each of these films and their unique and poignant drama in the comfort of your home.

Bujalski's first feature film, shot with non-professional actors on 16mm film, follows Marnie as she drifts through her days, feelings, and relationships. Bujalski sets the stage for his next films with characters dealing with and embracing their insecurities, neurotic friends, and the uncertainty of the future.

Bujalski's follow up to FUNNY HA HA finds us relocating to NYC. MUTUAL APPRECIATION was also shot on 16mm, but this time in black and white, giving the film a timeless quality while also very much reflecting its generational intricacies. As with FUNNY HA HA, Bujalski appears on screen and delivers another wonderful performance alongside the returning Justin Rice.

Set in Austin, Texas, this film follows twin sisters Jeannie and Laurie in their loving but imbalanced relationship. As Jeannie deals with a small business in turmoil, free-spirited Laurie wistfully drifts from day to day. Bujalski's interest in interpersonal relationships and what's left unsaid and offscreen continues in BEESWAX, with its characters increasingly engaged in the stresses of investors and business plans while still remaining focused on the connection and tension that exists between friends, family, and lovers.

A wonderfully weird departure from Bujalski's first three films, COMPUTER CHESS is a time capsule of a different sort. Where his first three films deftly capture the essence and wonder of post-collegiate drift, COMPUTER CHESS enters a universe all its own. Shot on time-appropriate video cameras and featuring vintage computer technology, the film portrays a gathering of programmers in a conference center trying to create a machine that can triumph over man in a game of chess. Add in some secret agents and adjacent cult conference attendees and the film becomes even more wild and quirky.

RESULTS pairs Bujalski with some well-known actors in Guy Pearce as a gym owner, Cobie Smulders as a gym employee, and Kevin Corrigan as a pitch-perfect foil to the health-obsessed personal trainers. RESULTS, viewed in a vacuum, can be enjoyed as a well-cast romantic comedy. But in the context of Bujalski's oeuvre, RESULTS demonstrates and highlights the filmmaker's fine skill as a writer. Scenes and dialogue that, in more cookie cutter rom-coms, might feel like asides or simple vehicles for moving the story along, instead resonate with Bujalski breathing life into the characters, and making them feel all-the-more flesh and blood.

Bujalski's most recent feature is in some ways a return to form, though shot with a much higher budget and a cast of professional actors. The film mirrors FUNNY HA HA in his obsessive focus on the protagonist, played spectacularly by Regina Hall. Viewers are brought up close and personal to the stress and compassion that unfolds and compounds in events large and small. The world of this film closes in on the workplace, and explores the dysfunctional and loving family relationships that can emerge and be reproduced there.

Our friends at the Austin Film Society caught up with Bujalski during quarantine, too, and picked his brain for some streaming suggestions. Check it out here!