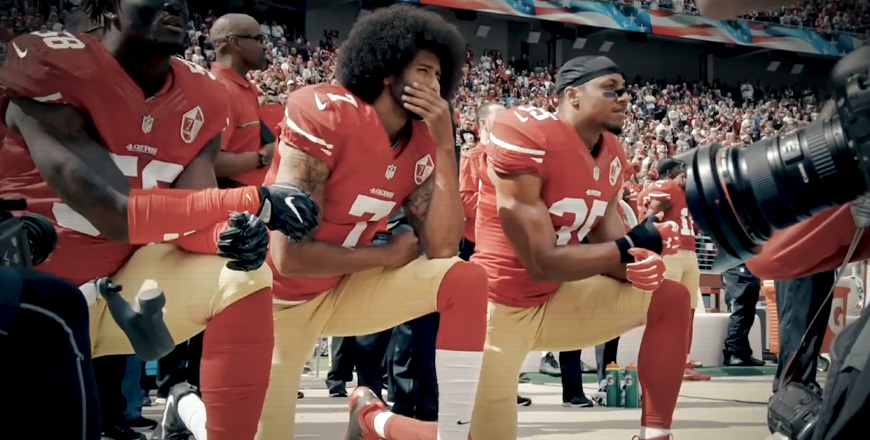 Dave Zirin joins us in person for a post-screening discussion with Howard Bryant of NPR and ESPN.

This event is free to Amherst Cinema Members.

In BEHIND THE SHIELD: THE POWER & POLITICS OF THE NFL, acclaimed journalist Dave Zirin of The Nation magazine and MSNBC.com tackles the myth that America’s most popular and influential sports league was somehow free of politics before Colin Kaepernick and other players took a knee.

Navigating a stunning excavation of archival media, Zirin traces how the NFL, under the guise of “sticking to sports,” has promoted militarism, war, and nationalism; glorified reactionary ideas about manhood and gender roles; normalized systemic racism and corporate greed; and helped vilify challenges to the dominant order as “unpatriotic” and inappropriately “political.”

Presented in collaboration with the Media Education Foundation.

“This film is about so much more than football – it is about where we are as a nation and what lies ahead. If you care about justice, watch this film!”
—Eddie S. Glaude Jr., Head of African American Studies at Princeton University

“If you think politics don’t belong in sports – watch this film!”
—Melissa Harris-Perry | Host of WNYC’s "The Takeaway"

"Terrifying and brilliant. After watching this film, I now believe that you cannot understand this country without understanding NFL football. I will be showing this film in my classes FOR THE REST OF MY LIFE."
—Robin D.G. Kelley | Professor and Chair of History, UCLA

“This film is both necessary and patriotic.”
—Jemele Hill | Sports Journalist, The Atlantic

Dave Zirin is the sports editor at The Nation, the first sports editor in the legendary magazine’s more than 150-year existence, and a columnist for MSNBC.com. Called “the best sportswriter in the United States” by the New York Times icon Robert Lipsyte, Zirin has written 11 books on the politics of sports and has appeared on ESPN, CNN, MSNBC, Democracy Now! with Amy Goodman, and numerous national radio programs and podcasts, from leading sports shows to NPR’s All Things Considered.

He has also been an advisor to filmmakers ranging from Ken Burns to Ang Lee, and has appeared in numerous documentaries.

Zirin’s writing has been published in the New York Times, the Los Angeles Times, the Washington Post, and many other publications.

Howard Bryant is the author of nine books, Full Dissidence: Notes From an Uneven Playing Field, The Heritage: Black Athletes, A Divided America and the Politics of Patriotism, The Last Hero: A Life of Henry Aaron, Juicing the Game: Drugs, Power, and the Fight for the Soul of Major League Baseball, Shut Out: A Story of Race and Baseball in Boston, the three-book Legends sports series for middle-grade readers, and Sisters and Champions: The True Story of Venus and Serena Williams, illustrated by Floyd Cooper, and contributed essays to 14 others.

He is a two-time Casey Award winner (Shut Out, 2003, The Last Hero, 2011) for best baseball book of the year, and a 2003 finalist for the Society for American Baseball Research Seymour Medal. The Heritage was the recipient of the 2019 Nonfiction Award from the American Library Association’s Black Caucus and the Harry Shaw and Katrina Hazard Donald Award for Outstanding Work in African American Studies awarded by the Popular Culture Association.

He has been senior writer for ESPN since 2007 and has served as the sports correspondent for NPR’s Weekend Edition Saturday since 2006. In 2017, he served as the guest editor for the Best American Sports Writing anthology.

He has won numerous awards, was a finalist for the National Magazine Award in 2016 and 2018, both for commentary, and earned the 2016 Salute to Excellence Award from the National Association of Black Journalists. In addition, Mr. Bryant has appeared in several documentaries, including Baseball: The Tenth Inning and Jackie Robinson, both directed by Ken Burns, and Major League Legends: Hank Aaron, produced by the Smithsonian and Major League Baseball.