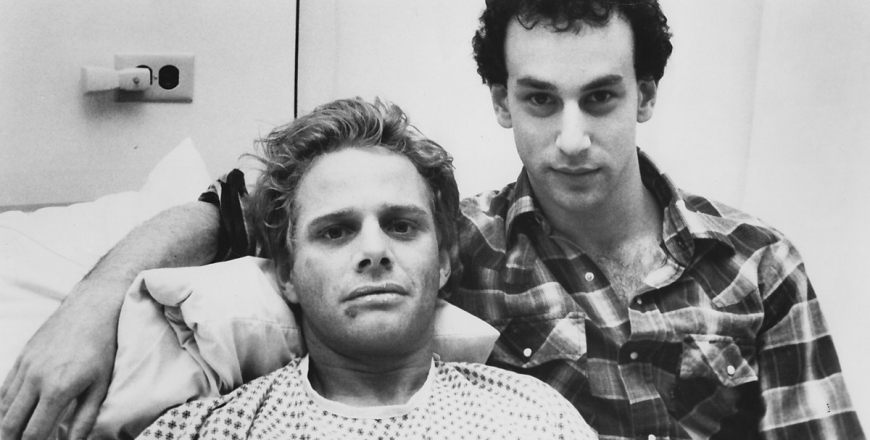 Roe Bressan, sister of the director, and composer Jeffrey Olmsted in person.

Arthur J. Bressan, Jr. created this gay indie masterpiece in 1985 after more than a decade of making gay adult films.

When 25-year-old gay yuppie David (David Schachter) volunteers to be a “buddy” to an AIDS patient, the community center assigns him to Robert (Geoff Edholm), a 32-year-old politically impassioned California gardener abandoned by his friends and lovers.

Revolving around the confines of Robert’s Manhattan hospital room, Bressan skillfully unfolds this devastating two-hander (the rest of the cast is only heard off-screen). As David gazes out at the piers and rooftops of Manhattan, we hear his deftly scripted diary entries in voiceover. And as David is changed by knowing Robert, so too are we.

In the simplicity of the story and the elegance of its unfolding, BUDDIES achieves a rare perfection. It’s a timeless portrayal of an entire era in gay history. The first feature-length drama about AIDS, BUDDIES has long been unavailable. Frameline is proud to present this new 2K digital restoration by Vinegar Syndrome.

Frameline and the Shanti Project co-presented the film’s original world premiere on September 12th, 1985 at the Castro Theatre with Bressan and his cast in attendance. Five days later, on September 17th 1985, President Ronald Reagan finally uttered the word “AIDS” in public for the first time. Sadly, Bressan and actor Geoff Edholm both died of AIDS, in 1987 and 1989 respectively. Buddies co-star David Schachter is alive and well in New York City.