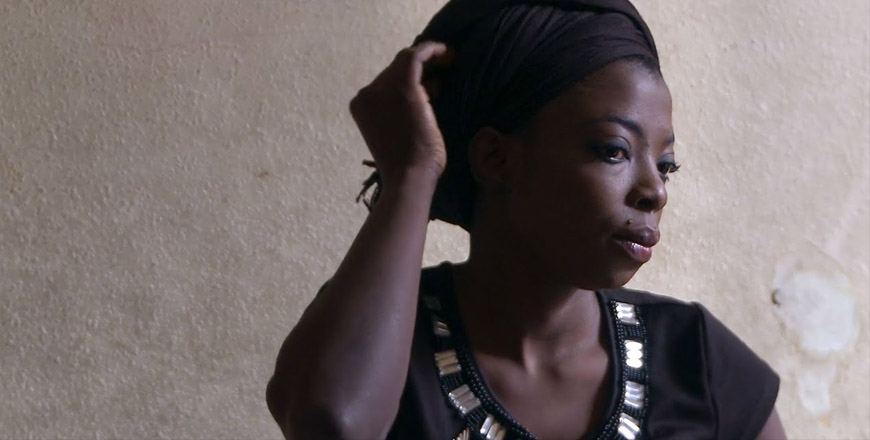 Filmmaker Rosine Mbakam joined us for a Zoom conversation in July 2020 as part of our Bellwether series, discussing her two previous films, CHEZ JOLIE COIFFURE and THE TWO FACES OF A BAMILÉKÉ WOMAN. Click here to watch.

Delphine reclines on a daybed in her bright apartment in Belgium, an empty crib beside her. “I started to work the streets like crazy,” she says, matter-of-factly recounting her life story. “Selling my body.”

Delphine, who is only identified by her first name, is quick-witted, engaging, passionate, and intense. Born and raised in Cameroon, at 30, she has survived a series of personal catastrophes. Her mother died in childbirth, and her father did little to care for his children. She was raped at 13, became a mother soon after, and supported herself with sex work on the streets of Douala. Now, she lives with a Belgian husband three times her age and their children, estranged from much of her family. Unable to find a job, Delphine styles hair at home and still turns to sex work from time to time to have some independence and money of her own.

In DELPHINE’S PRAYERS, she frankly shares her experiences with director Rosine Mbakam over several interview sessions, deftly switching between languages. Mbakam marks the start of each session with preparations for shooting: Delphine adjusting her makeup, tying her hair up in a scarf, or holding up a sheet to help the director adjust the white balance on her camera. The sessions are intimate—sometimes painful, sometimes funny—carried by Delphine’s exuberant storytelling style and her clear bond of trust with Mbakam, whom she has known for years. In Cameroon, Delphine and Mbakam came from different cultures and classes. But they both arrived in Belgium within months of each other, neither with friends. The director gives the film over to her subject, appearing herself only in the final moments of the film, where she offers a succinct commentary on her relationship with Delphine and their experiences as West African women. Like so many of her generation, Delphine left the oppression of a patriarchal society looking for a new life in Europe—only to find herself enmeshed in sexual exploitation of a different kind.

Like Rosine Mbakam’s previous documentary, the acclaimed CHEZ JOLIE COIFFURE, DELPHINE’S PRAYERS is shot in a single room. Along with her debut feature, THE TWO FACES OF A BAMILEKE WOMAN, Mbakam’s films offer an intimate glimpse into the lives of women whose stories are rarely seen on camera