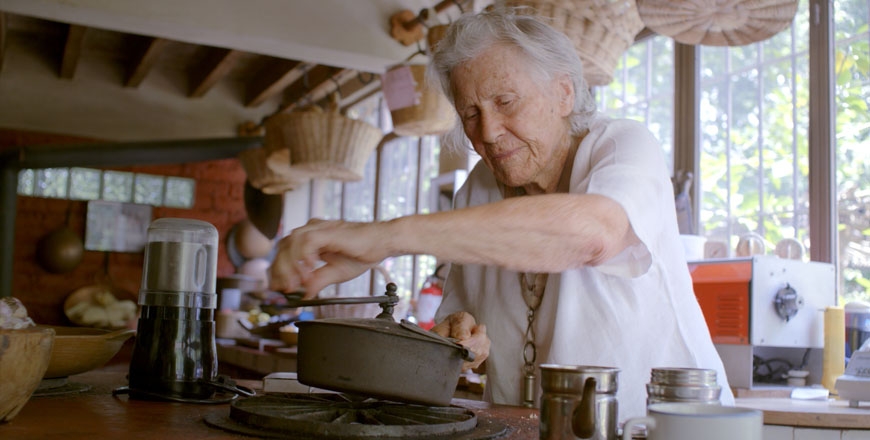 DIANA KENNEDY: NOTHING FANCY is an intimate, candid perspective into the curious world of 95-year-old cookbook author and British expatriate Diana Kennedy, widely regarded as the world’s academic expert on Mexican cuisine.

Standing barely five feet tall with a thick English accent, Diana is a formidable critic of anyone who doesn’t agree with her views on Mexican culinary traditions, or, God forbid, doesn’t recycle. The author of nine acclaimed cookbooks, Diana has spent nearly seventy years exploring Mexico (typically solo in her truck), and researching the country’s varied and complex cuisines.

A two-time James Beard Award winner, Diana was decorated with an Order of the Aztec Eagle from the Mexican government in 1982 and became a Member of the Order of the British Empire from the UK in 2002. Despite her notable achievements, Diana is difficult to categorize; often referred to as the “Julia Child of Mexico.” Given her ediger style, however, Diana prefers a different title: “The Mick Jagger of Mexican Cuisine.”

The film explores Diana’s vibrant, unconventional life, blending vérité with archival footage, photographs and interviews. Viewers accompany her in intimate settings at home: cooking, exercising, yelling at her dogs, driving her truck, and traveling to accept awards and speak to audiences. The film features interviews with notable chefs and friends of Diana, including Alice Waters, José Andrés, Rick Bayless, and Gabriela Cámara, along with footage from Diana’s 1992 TLC cooking show, “The Art of Mexican Cooking.”

Whether she is instructing chefs at her infamous “Boot Camp” cooking school, blazing over the cobblestone roads of Zitácuaro in her truck, or sunbathing with a scotch on her balcony, Diana is captivating—bold, spirited, and unapologetically herself.