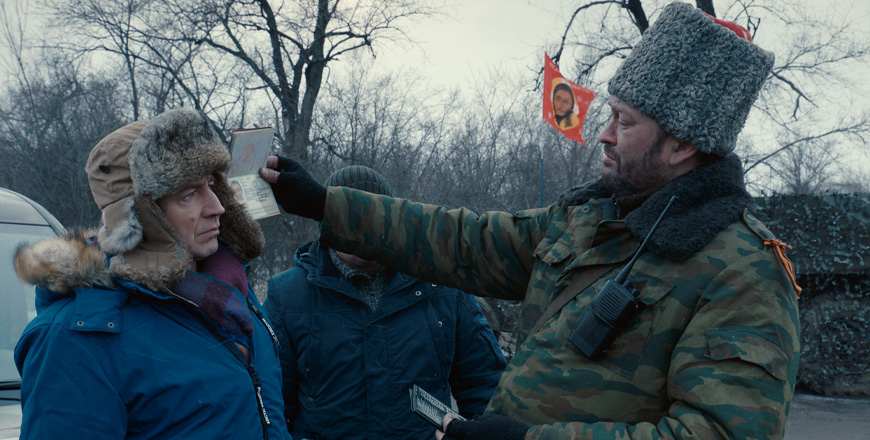 Polina Barskova, Assistant Professor in the Department of Slavic Languages and Literature at UC Berkeley, joins us for an informal post-screening discussion in our theater space.

In the Donbass region of Eastern Ukraine, mid-2010s: a hybrid war takes place, involving an open armed conflict alongside killings and robberies on a mass scale perpetrated by Russian-separatist gangs. In the Donbass, war is called peace, propaganda is uttered as truth, and hatred is declared to be love. Life is suffused with fear and suspicion. What is real and what is fake news?

Called "a darkly satirical omnibus of scathing vignettes" by the Washington Post, DONBASS serves as a crucial interpretation of the Russo-Ukrainian war, but the film is not, ultimately, a tale of one region or one conflict. It is about a world lost in post-truth and fake identities. It is about each and every one of us.

Film Movement, the distributor of DONBASS, will donate a portion of all ticket sales to the Ukraine Crisis Fund administered by Americares.

Polina Barskova teaches at UC Berkeley. Before returning to Berkeley, she spent 15 years teaching Russian Literatures at Hampshire College, as well as at Amherst and Smith colleges. Her scholarly publications include articles on Nabokov, Bakhtin brothers, early Soviet film, and the aestheticization historical trauma. Her book, Besieged Leningrad: Aesthetic Responses to Urban Disaster appeared from Northern Illinois University Press in 2016. She has also authored many books of poetry in Russian.

“Sergei Loznitsa’s DONBASS, which opens in American theaters today, is not exactly a new film. It was an Oscar entry in 2019 after making its debut at the Cannes Film Festival the year before, and the events depicted onscreen—fictionalized recreations of things rumored to have really happened—take place a few years before that, in the wake of Russia’s 2014 invasion of Eastern Ukraine.

Watching it now, as reports of Russian atrocities in other parts of Ukraine dominate the headlines, is unnerving in a way that’s hard to put into words...DONBASS, at once brutally satirical and grimly compassionate, focuses on the subtleties and grotesqueries of human behavior.” A.O. Scott. A New York Times Critic's Pick.