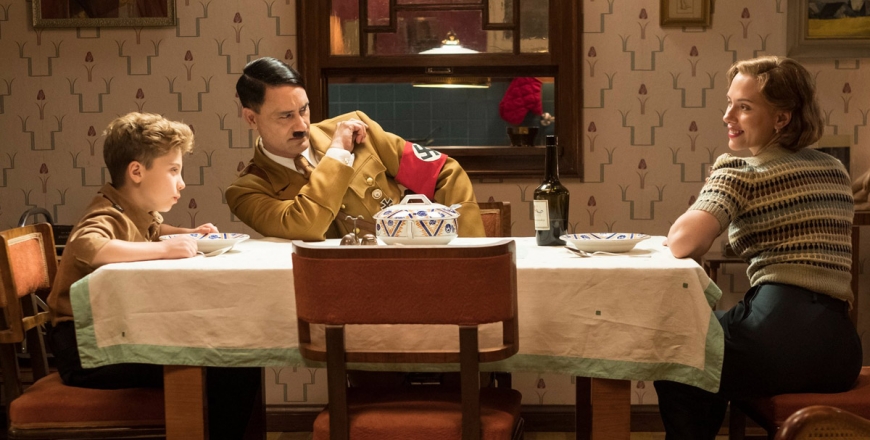 Winner of Best Adapted Screenplay at the 92nd Oscars®.

Writer director Taika Waititi (THOR: RAGNAROK, HUNT FOR THE WILDERPEOPLE), brings his signature style of humor and pathos to his latest film, JOJO RABBIT, a World War II satire that follows a lonely German boy (Roman Griffin Davis as Jojo) whose world view is turned upside down when he discovers his single mother (Scarlett Johansson) is hiding a young Jewish girl (Thomasin McKenzie) in their attic.

A director's statement from Taika Waititi:

“I have always been drawn to stories that see life through children’s eyes. In this case, it happens to be a kid that we might not normally invest in.

My grandfather fought against the Nazis in World War II and I’ve always been fascinated by that time and those events. When my mother told me about Christine Leunen’s book Caging Skies, I was drawn in by the fact it was told through the eyes of a German child indoctrinated into hate by adults.

Having children of my own, I have become even more aware that adults are supposed to guide children through life and raise them to be better versions of themselves, and yet in times of war, adults are often doing the opposite. In fact, from a child's point of view, during these times adults appear chaotic and absurd when all the world needs is guidance and balance.

I experienced a certain level of prejudice growing up as a Māori Jew, so making JOJO RABBIT has been a reminder, especially now, that we need to educate our kids about tolerance and continue to remind ourselves that there’s no place in this world for hate. Children are not born with hate, they are trained to hate.

I hope the humour in JOJO RABBIT helps engage a new generation; it's important to keep finding new and inventive ways of telling the horrific story of World War II again and again for new generations, so that our children can listen, learn, and move forward, unified into the future. Here’s to putting an end to ignorance and replacing it with love.”