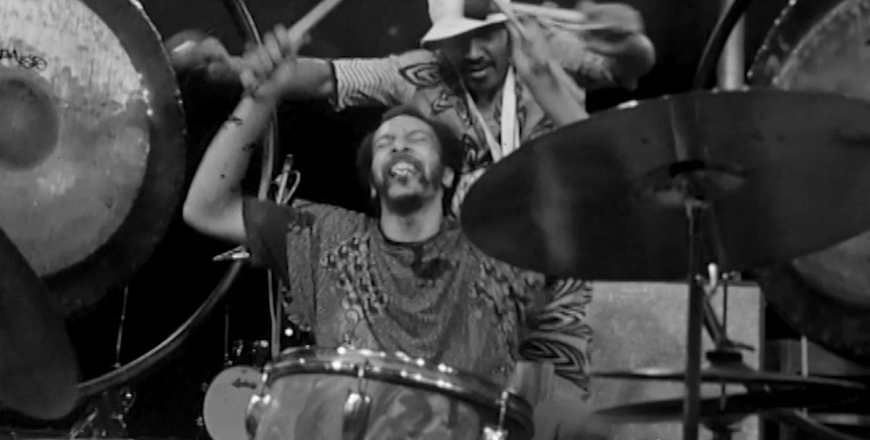 Graves has performed internationally since 1964, both as a soloist and in ensembles with such legends as Albert Ayler, Giuseppi Logan and Sonny Sharrock. He is widely considered to be a founding pioneer of avant-garde jazz, and he remains one of the most influential living figures in the evolution of the form.

The film draws the viewer through the artist’s lush garden and ornate home, into the martial arts dojo in his backyard and the laboratory in his basement - all of this just blocks from where he grew up in the housing projects for South Jamaica, Queens. Graves tells stories of discovery, struggle and survival, ruminates on the essence of 'swing,' activates electronic stethoscopes in his basement lab to process the sound of his heart, and travels to Japan where he performs at a school for children with autism, igniting the student body into an ecstatic display of spontaneous collective energy.

Oscillating from present to past and weaving intimate glimpses of the artist’s complex cosmology with blistering performances from around the globe, MILFORD GRAVES FULL MANTIS is cinema full of fluidity, polyrhythm and intensity, embodying the essence of Graves’ music itself.

"You can get a lot of facts about Mr. Graves and his discography on the internet (and I recommend you do). This movie gives you, well, the man’s heart, and it’s a beautiful one." Glenn Kenny. A New York Times Critic's Pick!

Meginsky frequently collaborates with choreographers and has worked with Cori Olinghouse, Paul Matteson, Jennifer Nugent, Susan Sgorbati, Katie Martin, Wendy Woodson and Nora Chipaumire. He has a longstanding artistic relationship with Gwen Welliver. Welliver and Meginsky will premiere a new evening-length work at Gibney Dance Center (NYC) in 2018. Meginsky is the recipient of a New Music USA Live Music for Dance award for his original composition for Welliver’s Beasts and Plots, which premiered at New York Live Arts in 2013 and will be restaged at the Guggenheim in 2018.

Matthew Guerrieri, wrote in New Music Box that the “over-the-top physicality and deliberate unpredictability” which mark Young’s Bromp Treb performances “can be heard as either a critique or a celebration of the questionable level of control we have over our own gadgets,” resulting in “the most optimistic electronic racket you’re likely to hear.” Marc Masters, writing about his first solo LP in The Out Door proposes that Bromp Treb uses “a singular sonic vocabulary” where his “biggest genius lies in his coordinating conjunctions and dependent clauses – his endless toolkit of aural sentence structures that turn pointillist specks into textured musical colorstorms. Yet somehow he also finds a range of timbre, tone, and mood inside all the solar showering; Concession Themes can be light or heavy, calm or consternating, funny or fractal.”

Since the late 90’s, Young has been programming experimental art events and building enthusiastic audiences. Projects have included performance and screening series such as the Bright Rectangle (1999 - 2003), the Montague Phantom Brain Exchange (2008 - 2010), Phantom Erratic (2011 - present), as well as The Peskeomskut Noisecapades (2011 - present), an outdoor winter landscape sound/performance festival held on the ice of a frozen river.

He has participated in residencies at Signal Culture in upstate NY (2016) and Deplayer in Rotterdam, NL (2009). In 2017, he was awarded the Massachusetts Cultural Council Fellowship for his work in filmmaking. He lives and works in Western Massachusetts, North America.