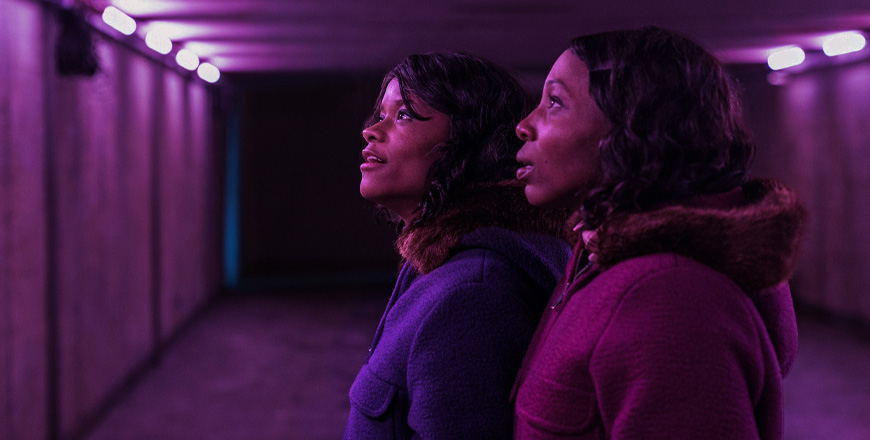 THE SILENT TWINS is the astounding true story of twin sisters who only communicated with one another. As a result, they created a rich, fascinating world to escape the reality of their own lives. Based on the best-selling book The Silent Twins, the film stars Letitia Wright and Tamara Lawrance.

June and Jennifer Gibbons were not always silent. Born in 1963, their early childhood involved following wherever the RAF work of their father took them, before the family settled in Haverfordwest, a town in Pembrokeshire, Wales. School life was not easy for the only West Indian kids in the area; the twins suffered much bullying for looking and acting differently to those around them. At home the pair had always been somewhat withdrawn from their siblings and parents, but increasingly these behaviors became more extreme and isolating.

The girls were unpredictable. They would attend class by walking in synchronization, mirroring each other’s steps, coming to a silent stop with no explanation. They could crumple to the floor if questioned, again in perfect unison. They were effectively mute at school, but not always quiet. Intense bursts of physical fighting could erupt between June and Jennifer seemingly with little warning. By the age of eight, the twins had stopped communicating with the outside world.

But cocooned in the relative safety of their bedroom, June and Jennifer invited the creative world in. They made their own dolls and stuffed toys, which became characters in elaborate plays that they wrote together. They broadcast a radio show to themselves, which they called Radio Gibbons: The Living Facts of Life. They developed what was originally taken to be a secret language, later revealed to be a mix of Barbadian slang and fast-spoken English, and when they did speak there was a lisp, a speech impediment. Their parents could hear the chatter through the door yet were never given access to witness such imaginative play.

The twins behaved in this way for years, confounding their family and the Welsh education system, which led to their referral to a child psychologist, Tim Thomas. Dedicated therapy followed, along with a short-lived attempt to separate the twins at two different schools. Nothing appeared to be working, much to the frustration and desperation of their family. The girls remained silent and uncommunicative in public, their strange behaviors unbreakable. Yet behind their bedroom door a parallel, very different life continued to blossom. After completing a writing course by post, their creative skills were now being developed through more intricate plays and written stories.

In 1979 the twins turned 16 and left school. Formal education had nothing left to try to teach them. Obsessed with American pop culture yet lacking any income, they became fixated on white expat American brothers who settled in a neighboring town. The Kennedy boys were the gateway drug for June and Jennifer to experience a social life entirely missing from their lives previously. They were silent no more. With sex, drugs and rock’n’roll on display in the Welsh suburbs, the Gibbons’ twins voraciously tried it all. Drinking moonshine and sniffing glue became a regular activity. Friction carried them home where the twins became increasingly jealous towards each other, competing for the boys’ attention, while separately striving to become the better writer. It wasn’t long before shoplifting and a petty crime spree followed. Jailed for setting a building on fire, the pair’s societal freedom ended abruptly when they were found guilty of 16 counts of burglary, theft and arson.

Institutionalized as 19 year-olds, familiar patterns emerged as June and Jennifer went quiet once more. The mirrored behaviors returned, as did the outbursts of violence towards each other and anyone who tried to curb them. The twins began serving an indefinite sentence inside Broadmoor high-security psychiatric hospital, a place normally reserved for serial killers and violent offenders. They were among the youngest patients ever admitted.

Journalist Marjorie Wallace had followed the twins’ court case and was shocked when they had been taken to Broadmoor. She sought contact with them, eventually gaining their trust and conducting a series of interviews while they were hospitalized. Those interviews formed the basis of Wallace’s book, The Silent Twins. The girls lost their twenties to Broadmoor, where they were sometimes together, often apart; sometimes well, often struggling. Secretly, June and Jennifer made a pact to rescue each other and break free. This film tells their story, from their point of view for the first time.