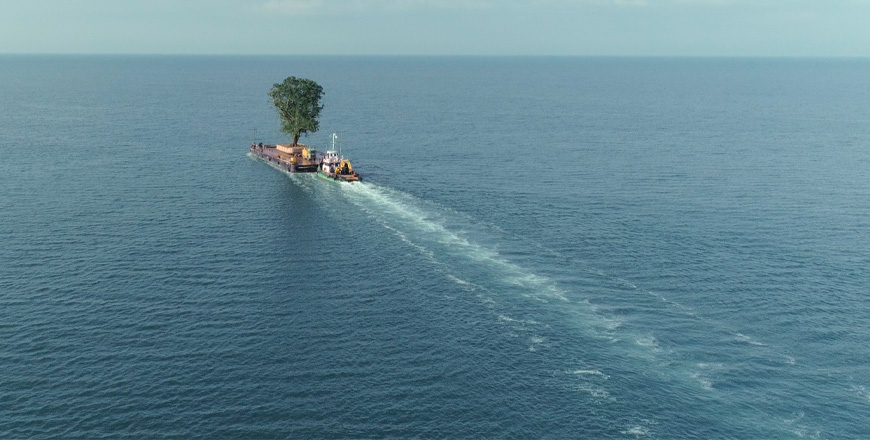 On September 6, 2021, director Salomé Jashi joined us all the way from Georgia for a virtual Q&A. Click here to watch the conversation.

A powerful and anonymous man has developed an unusual hobby. He buys century-old trees, some as tall as 15-story buildings, from communities along the Georgian coast and has them excavated to collect them for his private garden.

In order to transplant trees of such dimensions, the landscape surrounding them is ripped apart, and the people living around them forced to adapt to the disruption.

As the film follows this process through a tangible yet surreal reality, it portrays the needs and values of today’s Georgian society and reflects on the theme of forced migration, where "uprooting" is more than a metaphor.

Salomé Jashi was born in Tbilisi, Georgia in 1981. She first studied journalism and worked as a reporter for several years. In 2005 she was awarded a British Council scholarship to study documentary filmmaking at Royal Holloway, University of London.

Salomé’s THE DAZZLING LIGHT OF SUNSET (2016) was awarded the Main Prize at Visions du Réel’s Regard Neuf Competition as well as at ZagrebDox, Jihlava IDFF, Valdivia IDFF, and several other festivals. Her earlier work, BAKHMARO (2011), made in co-production with ma.ja.de. filmproduktion and MDR/Arte, received an Honorary Mention for a Young Documentary Talent at DOK Leipzig, was awarded as the Best Central and Eastern European Documentary at Jihlava IDFF, and was nominated for the Asia Pacific Screen Awards and Silver Eye Awards.

Salomé is the founder of two production companies: Sakdoc Film and Microcosmos, both producing documentaries and fiction of high artistic quality. She was a fellow of Nipkow Scholarship in 2017 and DAAD Artists-in-Berlin Program in 2020.